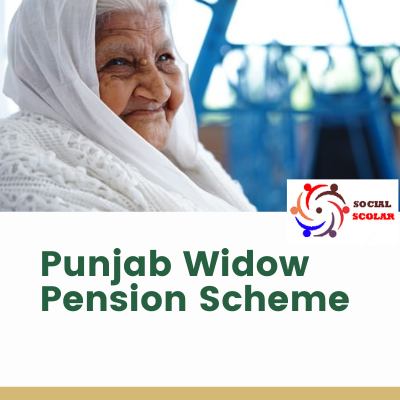 The Government of India offer financial protection through widow pension scheme.
The beneficiary gets Rs 300/month starting from the date of death of her husband.
The pension is transferred to the account of the beneficiary directly
Receiver with the age of more than 80 years gets Rs 500 every month.

Objectives of the Plan

⦁ To strengthen the penniless
⦁ women of the Punjab by offering a better livelihood.
⦁ To decrease the burden of the poor women and make the survival of the women.
⦁ To offer financial and social security for the women in the state.

⦁ Permanent citizens of Punjab.
⦁ The age limit of the user should be below 58 years.
⦁ The candidate must belong to the category of Below Poverty Line (BPL).
⦁ The candidate must not avail any financial assistance or pension under Central or State Government related to the widow pension scheme.

Note: In the case of unmarried women, the age limit of the candidate must be above 30 years.

Below steps to be followed as to register for the Widow Pension Scheme:

Step 1: The candidate should approach the official website of the Punjab Government.
Punjab https://punjab.gov.in 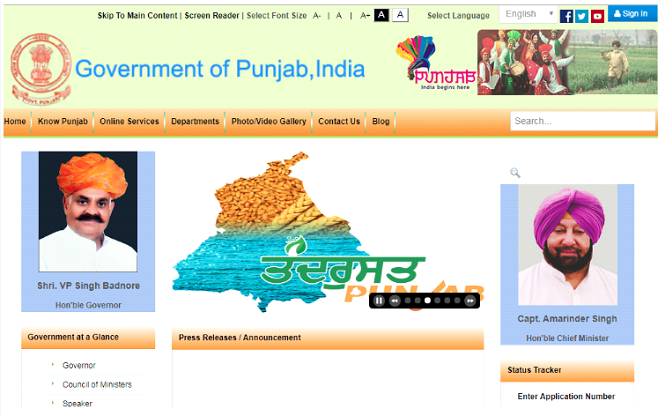 Step 2: Then just click on “Forms” option which is present on the home page of the portal. 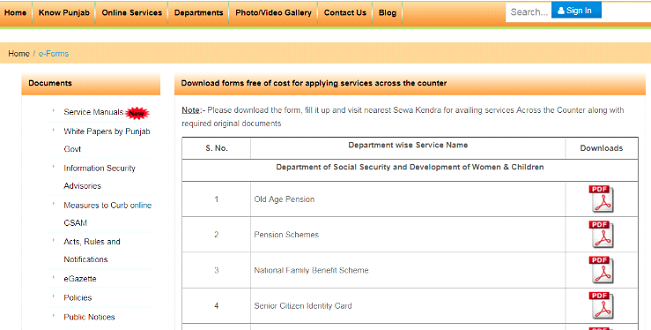 Step 4: From the Department of Social Security and Development of Women & Children to download the form as the candidate supposed to select the “Pension Schemes” option.

Step 5: After downloading the form, the applicant require to fill out the application by entering the given information mentioned below:

Step 6: Now, attach the necessary documents along with the application form and submit the correctly filled form at the office of the Government of Punjab and then your application will be confirmed by the concerned authority for sanctioning the pension amount.

The application form for Punjab Widow Pension plan is attached below for your reference. 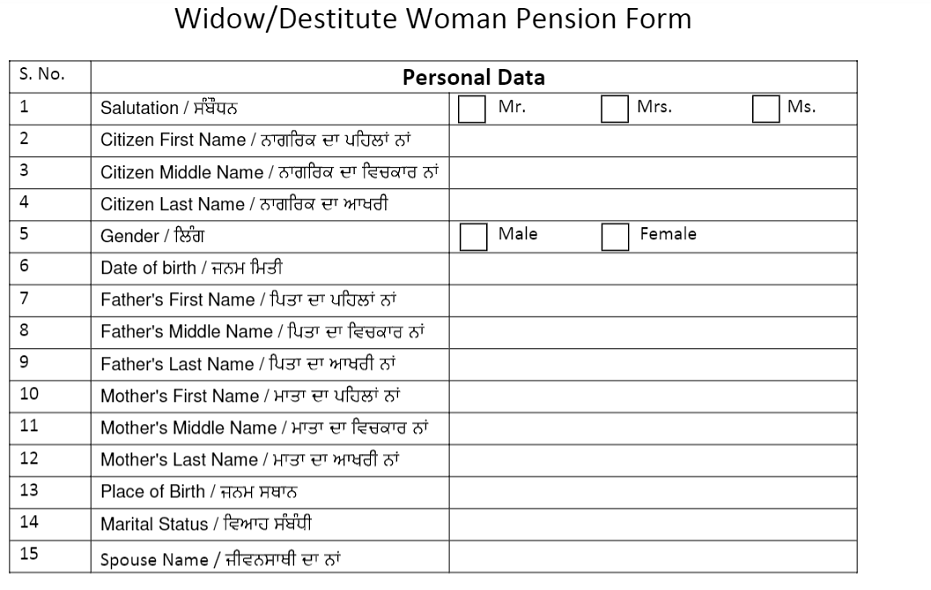 Application forms will be obtainable at Department Website, Anganwadi Centre, District Social Security Officer, Sewa Kendra, Child Development Project officer (CDPO), B.D.P.O Office, SDM Office, and Panchayat. The confirmation will be done by CDPO within one month from the date of receiving the application form, after that the pension will be permitted by DSSO.

When a girl husband dies, she has to absorb many issues. This issue becomes even more critical if the Female has small kids or is not capable to handle her responsibility. In such a circumstance, if someone offers hers financial aid, then she gets support to live. In regard of this, the government has begun Widow Pension Scheme.

The plan was initiated a long time ago by the Central Government. The purpose of this plan is to offer financial support to widowed women. Under this plan, Rs 300 is provided to the woman in the form of pension. The age limit to apply for this scheme is more than 40 years and below 59 years.

Widow women living below poverty line do apply for this. The similar plan has been implemented in various states of the nation so far. Thus the state governments are providing the benefit of this scheme to the eligible women. In Meghalaya, financial helping hand is being provided to eligible women only under the Indira Gandhi Widow Pension Plan.

Himachal Pradesh government has also started pension scheme for widow women. Under this plan, the financial assistance amount launched long ago was Rs 150. In 2020 it was amended and it has been increased to Rs 1000. Government of Himachal Pradesh With this helping hand offer by them, those pretty poor widow women have got a lot of help who did not have any means of income.
Maharashtra Widow Pension Scheme

The Maharashtra government has also started Widow Mahila Pension Scheme in the state.

Under this, financial helping hand of Rs 600 is being provided to widow woman every month. If the female has only one kid then Rs 600 and if there is more than one kid then Rs 900 will be given per month. The government has kept the age limit below 65 years for this. The annual income of the woman applicable in this plan must be less than 21000.

Under the Indira Gandhi Widow Pension Scheme in this state, an assistance amount of Rs 550 is offered to the eligible woman in the form of pension. For applying in the plan, the age of the woman must be more than 40 years and less than 59 years. The applicant should be living below the poverty line.

Haryana government has decided to give pension of Rs 2250 per month to widowed women. This is a big support to the eligible women of the state. With this help of the government, his financial condition will improve. To apply in this scheme, the age limit should be more than 18 years. The same widow woman do relevant for this whose annual income is less than 200000.

In the state of Bihar, Widow Pension Scheme has been started under the Uttar Pradesh Widow Pension Scheme. The Bihar government has decided to offer financial assistance of Rs 500 per month to the eligible woman. Only that woman do apply in this plan who is below poverty line.

In this state, the widow pension scheme is set off by Indira Gandhi Widow Pension Plan. Under this plan, the government provides a pension of 600 rupees per month to the widowed woman. In this amount, the state and central government contributes Rs 300. This plan is under the authority of Madhya Pradesh Social Justice and Public Welfare Department.

In this state, this plan has been initiated by the Social Welfare Department under the old age pension scheme. Under this, a widow woman is given 1200 rupees in two installments in a year.

This scheme has been started by the Government of Uttar Pradesh with the aim of helping the widowed women. Under this, the government will offer financial assistance of Rs 300 pension each month to the eligible women of the Uttar pradesh. The age limit for this should be between 18 to 60 years. These letters of pension will be sent directly to the woman’s bank account. These money will help the woman to buy her most essential items.

Just like in the above-mentioned states, the government has made arrangements for widow pension scheme, similarly in all other states also widow women pension scheme has been started.

Many states have increased its assistance amount according to their budget, and in view of rising inflation. So that the eligible woman feels more relief. The only purpose of all the states to initiate this plan is to offer financial support to widow women only and only. Apart from this, the eligibility, documents, objectives, benefits and method of applying for the scheme are all the same.

Therefore, we want to say that the eligible women of all the states that the manner to apply has been told in this blog for any eligible woman who need to apply for this scheme. If you want to get information about this scheme of other state, then she can get complete information in this regard from the Women Development and Public Welfare Department of her nearest block or district.

⦁ If an applicant is unable to apply through the online process,then she can also apply offline.

⦁ For this, first of all applicant has to go to the Women Development and Public Welfare Department located in his closeby block or district.

⦁ There, after telling his perspective to the employee, he has to take the widow pension form.

⦁ All the details asked in the form has to be filled rightly. After this, the essential documents supposed to be attached with the form. After doing all this procedure, applicant has to submit the form to the same department.

From the vidhwa pension, How much does a widow get?

Various states provide various amount to the widows of their state. However most of the states do give rs300 to rs500 per month.

Who is eligible for widow pension?

The recipient should be a widow, below the poverty line and must be the resident of the state under which she is applying for the Vidhwa pension Yojana. Other factors and the age group differ with state and are not generic.

Does a women get her hubby state pension when he dies?

When the husband declare dead, few of the state pensions entitlement may pass to his widow wife. However, the widow may get an extra state pension, if he/she entitled to it when he/she reaches to the age of state pension.

Old age pension is given to women who are 58 years old or more. The maximum income that a beneficiary must have to get the benefits of this plan is rs2000 per month.

What is the age limit for widow’s pension?

This is a State plan under which abandon or poor women and widow of 18 years of age or above are provided pension as per eligibility basis laid down in the rules of the scheme.

How long do you get widow’s benefits?

The widow’s pension normally lasts up to 52 weeks and is paid through weekly payments. Also, the payments are made until you attain the age you would start receiving your normal state pension.

What documents do I require for a widows pension?

Is there any right to widow pension after remarriage?

What is difference between pension and family pension?

Pension is a advantage that an employee gets post-retirement. If this retirement gain is passed on to the dependent family people, after death of the employee then it is known as family pension.